Beyond "equality" and "equity" to "justice" 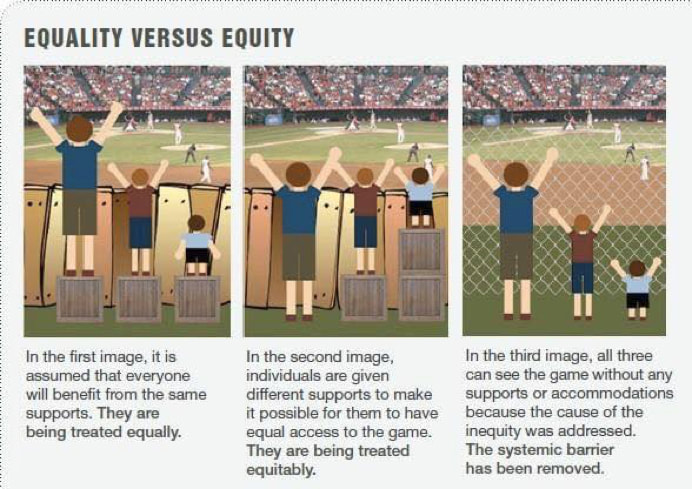 We've all felt it, most of us (if only when we were kids) have said it.

But what does it really mean?
<
>
In the first panel, we see a representation of that idea of "fairness" or "equality"  (In the image, three kids trying to watch a ball game all have a box to stand on.  That's fair.  They all have the same advantage. The advantage, however, does result in the same access for each kid.)

The concept of "fair" means that everyone, regardless of their circumstances, gets exactly the same thing, the same supports, the same access, same .... everything.
This is not actually very realistic.
We have loads of circumstances in the world where people have different privileges and supports for people based on circumstances.
It's not always a good idea for everyone to have the same access to things - 16 year olds can earn a driver's licence but 5 year olds can't. That's reasonable but not "fair".
People don't always need the same things - a toddler needs a booster seat to be able to eat from an adult sized table, but their parent probably doesn't need that booster seat so they don't get one. ​
In the second panel, we see a representation of "equity" rather than equality/fairness.  We have the same three kids, each a different height, still trying to watch a ball game.  We have the same resources available - three boxes.  This time, instead of everyone having an equal share of the resources - 1 box - the resources are distributed based on need.  The tall kid, who can already see over the fence, does not need a box, and therefore, does not take a box.  The kid of medium height can see over the fence by standing on one box, so that kid only takes one box, leaving two for the other kid.  The medium kid does not try to cut the boxes in half so that they can have one and a half boxes.  The medium height kid needs one box, they take one box.  The last kid is significantly shorter than their friends. One box does not give that kid enough height to see the game over the fence. Handily, there are two boxes left over out of the available resources, boxes the other kids don't need and didn't take and so, are available for the third and shortest kid.  That kid stands on two boxes and can watch the game along with their friends.
This is often a good solution, but it's often after the fact, a response to a situation that is already in place, an adaptation to existing circumstances.
​
But what happens when the resources are limited? What happens if only some people can access resources?
In the final panel, we see "justice", full inclusion.  in that last panel, the systemic barrier - the opaque, solid fence - was not built.  Instead, planning ahead, someone built a fence through which the game is visible regardless of a person's height.
This is the most successful solution.
It is not dependent on an ongoing supply of resources, BUT additional resources can be added if/as available.
It is useful for the largest number of people - a principle called Universal Design.
​